Due to the very large interest in the CCA 2012 conference, we are at the limit of the conference capacity and we need to fix now the organization details.  We cannot accept any more registrations and any additional participants from now! Registration on-site is not possible!

The 2nd generation of high temperature superconductors, the coated conductors (CC), have experienced a remarkable progress in processing as well as in applications. CC begin to have large impact on electrical and power engineering devices such as fault current limiters, cables, motors, generators and transformers, as well as magnet systems. CC are meanwhile an established commercial product with an increase of industrial suppliers.

For future systems, CC have the prospects of lower costs, reduced energy consumption, higher efficiency of components with reduced volume and weight, reduced environmental impact, offering new functionalities in devices and supporting the integration of renewable energy into the grid. HTS is one of the key technologies which will contribute in the future to an energy efficient society.

It is the time that CCA is changing to a 2-years cycle improving the role of this conference. The 2012 venue in the historic and University City of Heidelberg will provide an ideal atmosphere for the meeting in the background of an old historic place and the oldest university in Germany.

With the scope of the meeting we welcome intense discussions not only on the fundamental preparation efforts and processing technologies, but in particular the strategies toward improved critical current performance and we like to address more and more the issues for applications and future opportunities for technology to come to the market. 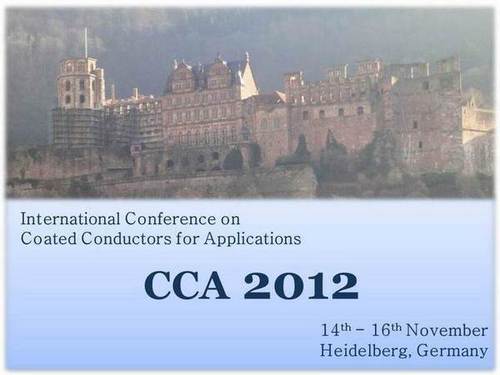