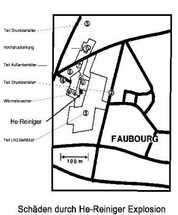 There are three hazards that can lead to fire and explosions: combustible gases, oxygen as fire promoter and ozone.

In certain mixture ratios with air, explosions are possible [1].
A dangerous hydrogen-air mixture can form by condensation of air on liquid hydrogen.
Oxygen
Liquid or gaseous oxygen can:
Hazards in oxygen systems
Ozone
N.B.: A danger not to be forgotten is the possibility of fires in the vicinity of cryogenic installations.

last change: 2009-10-04 KIT – The Research University in the Helmholtz Association